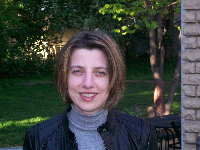 20012017
If you made any changes in Pure, your changes will be visible here soon.

Stephanie M. Hilger is a professor of German, Comparative Literature, French, and Gender and Women's Studies.

Her research focuses on gender, class, and race in British, French, and German literature from the eighteenth century to the present day. She is particularly interested in the ways in which current literary and cultural theory can be used for the analysis of eighteenth-century literature. Her first book, Women Write Back: Strategies of Response and the Dynamics of European Literary Culture, 1790 1805 (2009) explores the ways in which late eighteenth and early nineteenth century women authors rewrote and responded to texts written earlier in the century by male intellectuals. Using a postcolonial model of analysis, she investigates the strategies that these women writers used in order to publish their writings while entering into dialogue with famous – and by now, canonical -- works of literature.

Her second book, Gender and Genre: German Women Write the French Revolution (2014) examines German literary texts that depict and represent women as political agents during the French Revolution. The book focuses on the thirty-year period following the Revolution – a time when censorship limited French writing about the Revolution and the Napoleonic Empire continued the erosion of women’s rights that had begun during the Reign of Terror with the banning of women’s political clubs and the executions of important figures such as Charlotte Corday, Marie Antoinette, Olympe de Gouges, and Marie-Jeanne Roland.

In Spring 2012, Professor Hilger held a fellowship from the Illinois Program for Research in the Humanities for her current book project, “Liminal Bodies: Intersexuality in Literary and Medical Discourses.” This project investigates the literary and medical representation of individuals born with ambiguous genitalia from eighteenth-century Europe to present-day America. This interdisciplinary study explores the discursive intersection between the medical and legal mémoire and the autobiographical memoir and traces the related shift from the intersex individual as a silent object of medical science and legal discourse to a speaking subject in charge of his/her self-representation. The shifting boundaries of the intersex body comment not only on gendered perceptions of individual identity but also on the gendered construction of the body politic, which undergoes momentous changes from the French Revolution to the twenty-first century.

In Spring 2013, Professor Hilger was awarded a fellowship from the Program of Faculty Study in a Second Discipline. This fellowship allowed her to study embryology for her book project, “Liminal Bodies.” With the help of this fellowship, she will also continue her investigation of the intersections between literature and medicine.

She has co-edited The Early History of Embodied Cognition from 1740 to 1920: The “Lebenskraft” Debate and Radical Reality in German Science, Music, and Literature (2015). She is currently working on an edited handbook on interdisciplinary approaches to literature and medicine.

Professor Hilger has taught a wide range of courses in Comparative Literature, German, Gender and Women’s Studies, and English. For her teaching, she was awarded the 2011-2012 College of Liberal Arts and Sciences Lynn M. Martin Award for Distinguished Women Teachers.

Introduction: Bridging the Divide Between Literature and Medicine

No body? Radical gender in Memoirs of a Man's Maiden Years (1907)

The Early History of Embodied Cognition 1740-1920: The Lebenskraft-Debate and Radical Reality in German Science, Music, and Literature

Orientation and Supplementation: Locating the “Hermaphrodite” in the Encyclopédie

Johann Wolfgang Von Goethe
Your message has successfully been sent.
Your message was not sent due to an error.
If you made any changes in Pure, your changes will be visible here soon.