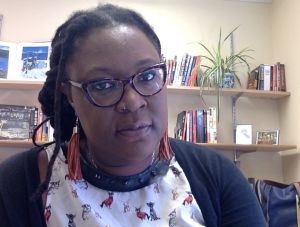 20102018
If you made any changes in Pure, your changes will be visible here soon.

I study the semiosis of race in young people's lives by conducting ethnographic research in different locations of the "African diaspora" (mostly digital or urban). My work specifically concerns the discourses and practices that constitute blackness, antiblackness, and anti-antiblackness.

One of my recent projects concerning digital subjectivity and sociality (there are a few) considers how uses of "emphatically black" and "intentionallly black" language and discourse in digital space function as public refusals of antiblack "raciolinguistic ideologies" (Rosa & Flores 2017) and semiotically, may help reracialize public spaces and reconfigure racialized signs in significant ways. Another project in development examines uses of black bodies in reaction memes/gifs and of black body parts in internet-mediated images by non-black people and situates these recursive digital practices within a timeline of slavery and its afterlife (following Saidiya Hartman's retemporalization of the present), and therefore within a history of corporeal theft (specifically, different practices of possession, body-snatching, dismemberment).

I've worked extensively with young urbanites in Monrovia, Liberia and Philadelphia, PA in the US, and I'm in the early stages of a new project with my cultural community: the Gullah/Geechee of coastal and insular South Carolina.

Corrigendum to "'We had lighter tongues': Making and mediating Gullah/Geechee personhood in the South Carolina Lowcountry" [Lang. Commun. 32 (2012) 147-159]

The proverbial monkey on our backs: Exploring the politics of belonging among transnational African high school students in the US

politics
school
student
Your message has successfully been sent.
Your message was not sent due to an error.
If you made any changes in Pure, your changes will be visible here soon.