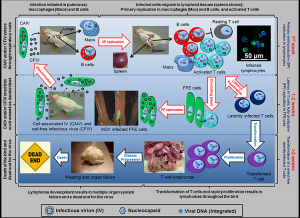 My laboratory is interested in the replication and pathogenesis of herpesviruses.  We utilize the natural virus-host model of Marek’s disease virus (MDV) in chickens.  MDV causes Marek’s disease, a devastating disease characterized by neurological disorders, generalized immune suppression, and neoplastic T cell lymphomas.  The highly oncogenic nature of MDV makes this virus an excellent model for studying the transformation of lymphocytes and the metastasis of lymphoid tumors in animals and humans, in addition to its unique cell tropism and transmission traits.  MDV initially infects B lymphocytes, followed by activated T lymphocytes, in which it can transform cells into lymphomas.  This is similar to the human herpesviruses, Epstein-Barr (EBV) and Kaposi’s sarcoma-associated (KSHV) gammaherpesviruses.  MDV also infects feather follicle epithelial (FFE) cells and about 2 weeks after initial exposure to virus, MDV is shed into the environment as dander.  The infectious virus and dander is subsequently taken up through the respiratory tract of uninfected chickens and the virus life cycle is repeated within the new host. This form of transmission is similar to the human herpesvirus that causes chicken pox, varicella-zoster alphaherpesvirus (VZV).

There is little information on how herpesviruses transmit from one host to the other, despite the importance for this process in pathogen dissemination in populations. Our laboratory has identified two viral proteins, glycoprotein C (gC) and UL13 protein kinase, that are essential for transmission of MDV from chicken-to-chicken.  Our laboratory studies the mechanistic role(s) these genes play during transmission in order to better understand how they facilitate this process. We utilize viruses that express fluorescently tagged proteins to track the virus during its pathogenesis, in order to identify where potential blocks in transmission may occur. 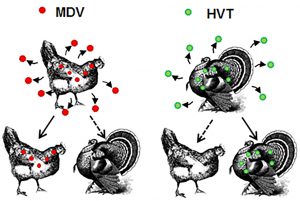 Another focus in our laboratory is the evolutionary basis for host switching of herpesviruses. Herpesviruses are often associated with a single host species, indicating they have evolved together with their host over millions of years. For example, MDV spreads among chicken flocks with ease but does not often transmit to other avian species. Likewise, turkey herpesvirus (HVT) spreads among turkey flocks, but does not often transmit to other avian species. Despite a high level of homology between the two viruses, rarely do they jump species. Our goal is to understand how herpesviruses host switch and identify the genes responsible for this using natural virus-host models.

We are also beginning to incorporate human herpesviruses varicella-zoster (VZV) and herpes simplex (HSV) into our research with the help of Dr. Charles Grose’s Lab at the University of Iowa.  Human and avian herpesviruses have similar tropisms to replication in the skin of their host, so we are utilizing our avian model systems for understanding human herpesvirus skin replication and transmission.

A unique attribute of MDV replication is its strict cell-associated nature during replication in tissue culture cells and during in vivo replication in lymphocytes. The only known cell type able to produce fully infectious virus are FFE cells in the skin. These characteristics are similar to the human herpesvirus varicella-zoster virus (VZV), which causes chicken pox and shingles, where fully infectious cell-free virus is only produced in skin cel

ls. The reasons for why MDV and VZV are so tightly cell-associated in vitro have long been a hindrance to research on these viruses, but we intend to use this as a benefit to understanding herpesvirus replication.

We have found that some viral genes are “silent” or not expressed well during in vitro replication in chicken embryo cell (CEC) cultures, while they are abundantly expressed in situ (feather follicle epithelial or FFE) cells. One example is pUL47 of MDV shown here in which we tagged the UL47 gene with the eGFP protein to visualize its expression.

Fingerprint is based on mining the text of the expert's scholarly documents to create an index of weighted terms, which defines the key subjects of each individual researcher.