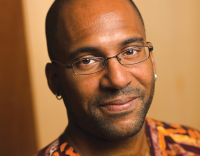 20022016
If you made any changes in Pure, your changes will be visible here soon.

Erik S. McDuffie is an Associate Professor in the Department of African AmericanStudies at the University of Illinois at Urbana-Champaign (UIUC). His research andteaching interests include the African diaspora, the Midwest, black feminism,black queer theory, black radicalism, urban history, and black masculinity.  He is the author of Sojourning for Freedom: Black Women, American Communism, and the Making of Black Left Feminism (Durham, NC: Duke University Press, 2011). The book won the 2012 Wesley-Logan Prize from the American Historical Association and the Association for the Study of African American Life and History, as well as the 2011 Letitia Woods Brown Award from the Association of Black Women Historians.  He is also the author of several scholarly articles and essays published in African and Black Diaspora: An International Journal; African Identities; American Communist History; Biography; Journal of African American History; Journal of West African History; Palimpsest: A Journal on Women, Gender, and the Black International Women of Color; Radical History Review; Souls: A Critical Journal of Black Politics, Culture, and Society; Women, Families, and Children of Color among other journals and edited volumes.

Currently, he is working on a new book, tentatively titled Garveyismin the Diasporic Midwest: The American Heartland and Global Black Freedom,1920-80.  Drawing from original research conducted in Canada, Ghana, Grenada, Jamaica, Liberia, South Africa, Trinidad and Tobago, and the United States, the book is the first to establish the importance of the Midwest to twentieth-century black transnational politics and to demonstrate vibrant political exchanges between the heartland and African world through Garveyism.  The book has received recognition. In 2017, he won an American Council for Learned Societies fellowship and the Outstanding Research Contribution in African American Studies Award from the Department of African American at the University of Illinois.  In 2016, he received a National Endowment for the Humanities fellowship.  In  2014, he received the Richard and Margaret Romano Professional Scholar award from the University of Illinois.  The three-year award is based upon the recognition of scholars’ outstanding achievements in research andleadership at UIUC.  Professionally, he is a member of several scholarly associations.  These include the Association for the Study of the Worldwide AfricanDiaspora (ASWAD), American Historical Association (AHA), Association for theStudy of African American Life and History (ASALH), Association of Black WomenHistorians (ABWH), American Studies Association (ASA), Organization of AmericanHistorians (OAH). His sits on the executive board of ASWAD.

He has taught at the University of Illinois and University of Delaware. In 2010,   he won the Helen Corley Petit Award   (Illinois). This honor is given for extraordinary accomplishment during the tenure probation period by the College of Liberal Arts and Sciences. He also received the Outstanding Teaching Awardin African American Studies from the Department of African American Studies(Illinois) for AY 2010-11. He earned his Ph.D. in history in 2003 from New York  University with a concentration in the African diaspora and U.S. history since1865.  Originally from Detroit, McDuffie is a sixth generation Midwesterner, whose family hails from the United States, Canada, and St. Kitts.

"A new day has dawned for the UNIA": Garveyism, the Diasporic Midwest, and West Africa, 1920-80

The Diasporic Journeys of Louise Little: Grassroots Garveyism, the Midwest, and Community Feminism

Chicago, garveyism, and the history of the diasporic midwest

"If you're in a country that's progressive, the woman is progressive": Black women radicals and the making of the politics and legacy of Malcolm X

From Grenada to Montreal: The Diasporic Journeys of Louise Langdon, Garveyism, and the Struggle for Black Liberation

Africa for the Africans at Home and Abroad: Liberia, Garveyism, and the UNIA

History
African Diaspora
African Americans
Minorities
Pioneers
Your message has successfully been sent.
Your message was not sent due to an error.
If you made any changes in Pure, your changes will be visible here soon.