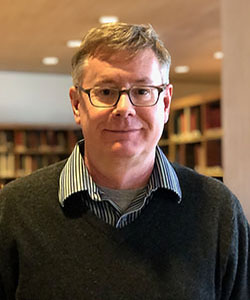 19952012
If you made any changes in Pure, your changes will be visible here soon.

David O’Brien’s research focuses on French art of the eighteenth and nineteenth centuries.  His first book, After the Revolution: Antoine-Jean Gros, Painting, and Propaganda under Napoleon (Penn State, 2006; published in French translation by Éditions Gallimard, 2006) examined the interplay of art and propaganda under Napoleon Bonaparte.  His second book, Exiled in Modernity: Delacroix, Civilization, and Barbarism (Penn State, 2018), interprets Eugène Delacroix’s work as a response to modernity. He edited the volume Civilisation and Nineteenth-Century Art: A European Idea in Global Context (Manchester UP, 2016), co-edited Remembering Brown at Fifty: The University of Illinois Commemorates Brown v. Board of Education (University of Illinois Press, 2009), and co-authored Beyond East and West: Seven Transnational Artists (University of Washington Press, 2004).  Currently he is writing a book on the ways in which Napoleon was remembered in images and objects from 1815 to 1848.

Napoleonic Painting, the Museum, and Memory