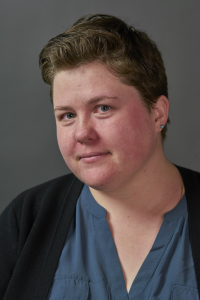 20132019
If you made any changes in Pure, your changes will be visible here soon.

In 2015, Clara Bosak-Schroeder joined the Classics department of UIUC where she is also an affiliate of History, Medieval Studies,  Comparative and World Literature, and the Unit for Criticism and Interpretive Theory. She received her PhD in Classical Studies from the University of Michigan, with certificates in Greek and Roman History and Graduate Teaching, and a BA in Classical Languages from UC Berkeley. Since joining UIUC, Clara has won a Faculty Fellowship from IPRH (2017-2018), a Junior Fellowship from the Unit for Criticism and Interpretive Theory (2018-2020), and has been recognized as a LEAP Scholar (2018-2020). Clara works at the intersection of classics and the environmental humanities, with a focus on Greek and Roman historiography and technical literature. Tiny robotic theaters, giant elephant puppets, and hairy women have appeared in her publications. Clara's book project, Other Natures: Environmental Encounters With Ancient Greek Ethnography, demonstrates that the first “environment” of the western intellectual tradition intertwined nature and culture and cast humans and nonhumans in complex, interdependent relationships. A second project applies new materialisms to classical reception studies while a third investigates the dialogue between classical scholarship and early modern primatology.

Making specimens in the periplus of Hanno and its imperial tradition

The Religious Life of Greek Automata.

One Weird Trick: Cutting Wheat and Other Processed Foods in Ancient Greece

Environmental Ethics in the Ancient World