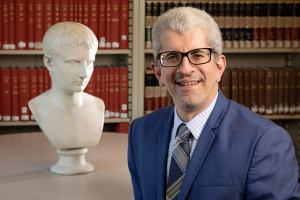 20032019
If you made any changes in Pure, your changes will be visible here soon.

Antony Augoustakis (B.A. University of Crete 1994, Ph.D. Brown 2001) is Professor and Head of Classics and Langan Professorial Scholar in the College of Liberal Arts and Sciences (2016-2019). He is affiliated with the Department of Medieval Studies, the Program in Comparative and World Literature, and the Center for Translation Studies. He is the editor of Classical Journal. His research interests include Latin imperial epic, Roman drama and historiography, women in antiquity, and gender theory. He is the author of Statius, Thebaid 8 (Oxford University Press, 2016), Motherhood and the Other: Fashioning Female Power in Flavian Epic (Oxford University Press, Oxford Readings in Classical Literature and Gender Theory, 2010) and Plautus’ Mercator (Bryn Mawr Latin Commentaries, 2009). He is the editor of Epic Heroes on Screen  (co-edited with Stacie Raucci, Edinburgh, 2018), Libri Carolini  (co-edited with Barbara Wallach, ICS 42.2, 2017), STARZ Spartacus: Reimagining an Icon on Screen (co-editor with Monica Cyrino; Edinburgh University Press 2016), Oxford Readings in Flavian Epic (Oxford University Press, 2016), Flavian Poetry and its Greek Past (Leiden, 2014), Ritual and Religion in Flavian Epic (Oxford University Press, 2013), the Blackwell Companion to Terence  (co-editor with Ariana Traill; Wiley/Blackwell, 2013), the Brill Companion to Silius Italicus (Leiden, 2009), and Statius’s Silvae and the Poetics of Intimacy (guest editor with Carole Newlands; Arethusa 40 (2007)). A forthcoming volume on Campania in the Flavian Poetic Imagination  (co-edited with R. J. Littlewood) will be published in February 2019 from Oxford University Press. Current projects include a monograph on Death and Ritual in Flavian Epic and a co-edited volume on Fides in Flavian Literature (with Claire Stocks and Emma Buckley), as well as two commentaries, one on Book 3 of Silius Italicus’ Punica (with R. J. Littlewood, under contract with Oxford University Press) and one on the Pseudo-Virgilian Ciris (with Laurel Fulkerson). He is completing a translation of Silius Italicus' Punica with Neil Bernstein (Ohio University), which is forthcoming from Routledge.

Campania in the Flavian Poetic Imagination

Campania in the Flavian Poets’ imagination

Introduction: The Reinvention of the Ancient Hero

The Representation of Ancient Women on Screen

Terence and his World